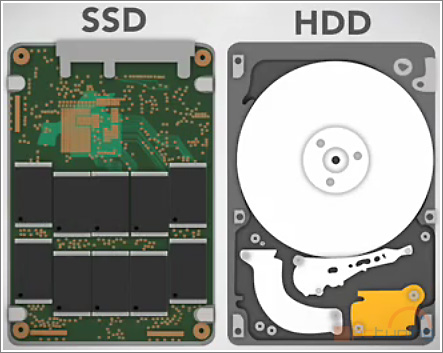 Watch the video above. The SSD Drive is on the far right.

There’s been a lot of hype in the tech community about the solid state drive advantage (SSDs) over mechanical hard drives (HDDs). Since SSDs don’t have moving parts, they’re able to access data almost instantly and they offer dramatically improved reliability and durability. Hard disk drives, however, have been around since the 1950’s and remain mostly unchanged. In contrast, SSDs were released in the late 2000’s and offer lightning speed performance comparatively. Here are the advantages of SSDs.

The continuous motion generated by an older hard drive’s (HDD) moving parts creates heat, which is a leading factor in hard drive failure. Hard drives are one of the notebook components most likely to fail. Since SSDs don’t have moving parts, common problems like heat and noise are not an issue, resulting in night and day reliability compared to a mechanical hard drive. Also, the MTBF (mean time between failure) reliability rating for hard drives is around 600,000 hours, whereas for SSDs it’s usually more than 1,200,000 hours. SSDs also have extreme shock and vibration tolerance. The bottom line: your data – all of your photos, movies, files, and more – is much safer when saved to an SSD than when saved to a hard drive.

In geek terms, without the moving mechanical parts that cause latency issues, SSDs are not impeded by spin-up, seek time, or rotational latency. This equates to faster boot times, nearly instant load times, and greater overall responsiveness, which mean you get more work done in less time. Multiple that regained time X the number of employees X your bill rate and you make MORE PROFIT.

With no moving parts, SSDs require less power to operate, and they extend battery life in laptops, UPSs and portable electronic devices.

SSDs weigh less than hard drives, so they make your system easier to haul around and can reduce shipping costs if that’s a factor.

With no spinning parts, SSDs are nearly silent when they operate, similar to that of a standard USB flash drive rather than the constant, noisy humming of a mechanical hard drive.